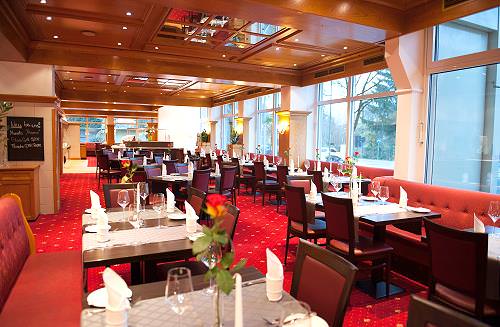 Stay at the peaceful Holiday Inn Munich-South hotel for quick and convenient U-Bahn subway links to the city centre.
Artwork of Bavarian monuments adorns the stylish lobby at Holiday Inn Munich-South, where you’ll receive a warm welcome from our friendly staff. After a sound sleep in your spacious guest room, the day starts with sparkling wine and continental specialties from our extensive breakfast buffet. Relax in our serene courtyard, which has a fish pond and Japanese trees.

Our 11 wireless Internet-connected meeting rooms will suit your conferences for up to 180 delegates. Attend meetings at Tech Data 400m away, Carl Zeiss 400 metres away and McDonald’s offices, 800 metres away. We’re 43km from your flight at Munich Franz Josef Strauss Airport, which is 38 minutes by S-Bahn S8 train to central Marienplatz square.

Machtlfinger Strasse subway station is only 500 metres from us, for a 12-minute U-Bahn ride to Marienplatz’s Gothic Rathaus and Frauenkirche church. We’ll ease your family’s visit as children under 12 eat and stay for free at Holiday Inn Munich-South. Arrive in autumn when Munich’s beer tents fill with Weissbier kegs and folk music during Oktoberfest.

Munich is well connected to the rest of the world, being an international business hub. The Munich International Airport has been voted the best airport of Europe in 2015. It has links with most airports in Germany and Europe along with several intercontinental sites viz., Abu Dhabi, Bangkok, Boston, Chicago, Delhi, Houston, Johannesburg, Montreal New York, and so on. The major airlines that Munich offers are Lufthansa and its Star Alliance partners like Air China, SAS, All Nippon Airways, Air Canada, South African Airways, Thai, Singapore Airlines, Swiss, United Airlines, Egypt Air, Turkish Airlines and US Airways.

Railway in Munich is well connected to major cities of Europe like Amsterdam, Budapest, Innsbruck, Maribor, Milan, Rome, Venice, Verona, Vienna, Zurich and others. There is one central station i.e., Munich Hauptbahnhof which is located right at the city’s centre and two smaller stations at Pasing in the west and Munich Ostbahnhof in the east all of which are linked to the public transport system and serve as transportation hubs. There is also a private sector railway company Deutsche Bahn that provides regional as well as long-distance connections to many German cities.

Munich can be easily reached via bus, especially from Eastern Europe and the Balkans. The Central Bus Station in Munich is ZOB which offers 29 bus terminals that are well-connected to various places across Germany and Europe. It has a provision of 130 buses that regularly travel to and fro Munich. The most common links are with Berlin, Hamburg, Dresden and Prague. Travelling by bus is not very costly and astonishingly comfortable.